… enchanting spells to conjure up nature … 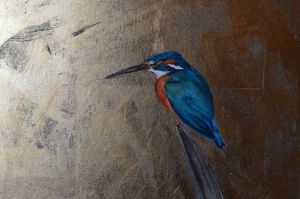 Hailed as one of the most beautiful books of the year, The Lost Words is a delightful collaboration between the very inspiring nature writer, Robert Macfarlane, and a supremely talented illustrator, Jackie Morris. Together they have produced a cross between a medieval illuminated manuscript and spell grimoire. The conceit behind the work is that Robert’s words have to conjure the missing animals and plants back into the world.

Each spell takes up three double page spreads. First there is a spread showing a lack: a shadow, an absence, a washed out line drawing; then comes the spell of conjuration and a full page portrait; and finally another full double page spread showing the living object in its landscape. This creates a beguiling rhythm to the procession of beautiful images across these large pages.

The poems themselves are acrostic, spelling out the plant or creature’s name using the first letter of the lines and have a Anglo-Saxon kenning quality about them. Robert twists and turns words about using alliteration and assonance to create evocative word combinations which really come alive when spoken out loud – rather like the expressive nature poems of Gerald Manly Hopkins. Jackie‘s illustrations are seductively gorgeous, making one want to linger over the pages, searching out the detail and basking in the gold leaf.

The whole book is truly delightful – full of humour, warmth and artistry.  And what’s more, there is an exhibition of their collaboration running at Compton Verney until 17th December. Further details are here.

Robert Macfarlane has established himself as one of the finest landscape writers of recent times. His wonderful book, Landmarks, (Hamish Hamilton, 2015) defends the lost language of the British countryside and is a precursor to this work. His other books include Mountains of the Mind, The Wild Places and The Old Ways. I can highly recommend all of these books. He is a Fellow of Emmanuel College, Cambridge, and writes on environmentalism, literature and travel for publications including the Guardian, the Sunday Times and The New York Times.

Jackie Morris has created over forty books, including beloved classics such as Song of the Golden Hare, Tell Me A Dragon, East of the Sun, West of the Moon and The Wild Swans – and my personal favourite, Can you see a Little Bear? which will be re-released next Summer. She collaborated with Ted Hughes, and her books have sold more than a million copies worldwide.  Have a look at her website here.

The Lost Words was published by Hamish Hamilton in October 2017 and is my eighteenth review for the British Books Challenge 2017.