Mary Newcomb (1922-2008) was a scientist, farmer and a self taught artist who settled in rural East Anglia. Her works are a delightful mix of humour, close observation and near abstraction. This exhibition, Mary Newcomb: Nature’s Canvas, is a thoughtful presentation over fifty works, displayed alongside extracts from her writing and also selected work by the artists (including Alfred Wallis, Milton Avery and Winifred Nicholson) that inspired her. Apart from show stoppers such as The Lady with a bunch of Sweet Williams (above) and quirky titles (Cows affronted by Land Drains), I particularly like her sketches and watercolours … 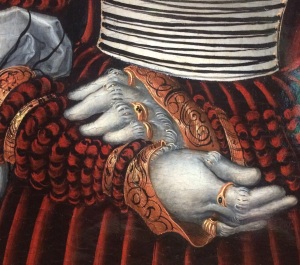 Who isn’t beguiled by Cranach? His sinuous, other worldly women and big nosed men in their sumptuous clothes and fine jewels, END_OF_DOCUMENT_TOKEN_TO_BE_REPLACED

… absolutely extraordinary. Go and see them … 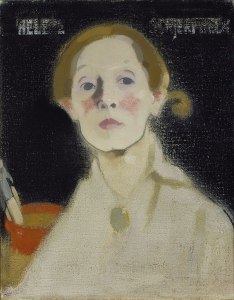 Wow! What a revelation! Why have I not heard of this artist before?

Helene Schjerfbeck (1862–1946) is a Finnish national icon – and most of her work remains there – after wandering around the Jungels-Winkler Galleries at the back of the Royal Academy, I can see why. I would hold onto every single one of them, tightly. From gorgeous END_OF_DOCUMENT_TOKEN_TO_BE_REPLACED

… two favourites from The PreRaphaelite Room …

The star which dominates the room is The Prioress’s Tale Cabinet, designed by Philip Webb and decorated by Edward Burne-Jones. He gave it as a wedding present to William Morris on his marriage to Jane Burden in 1858. However I like to truffle out some of the more over looked pieces in this gallery – and discover END_OF_DOCUMENT_TOKEN_TO_BE_REPLACED

… two portraits of an affair … 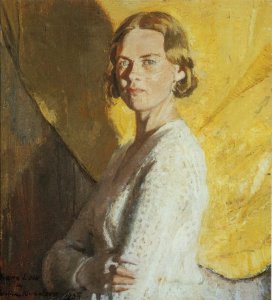 Diana Low, a student painter, was heavily influenced by William Nicholson. They had a short affair as recalled later by her brother in law.  END_OF_DOCUMENT_TOKEN_TO_BE_REPLACED 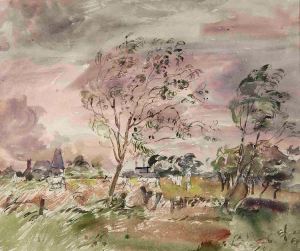 “We look, in landscape painting, not primarily for a rationalised statement, nor for a description of fact but for the moment of vision,” wrote Thomas Hennell.
Sometimes referred as an English Van Gogh, Thomas Hennell was deeply religious and suffered a breakdown which put him in a mental institution for a couple of years. Writing and watercolours helped him recover. His work records rural scenes, often populated with craftsmen and Thomas eventually became an Official War Artist in World War II. Whilst in Indonesia in 1945, he was captured by nationalist fighters in and presumably killed.
He was lionised by contemporaries: “We [Bawden and Ravilious] regarded him as a man
of genius.”

This scene is probably at Ridley in Kent, close to Orchard Cottage, where Hennell lived between 1935-43. Knowing his story, it is impossible to un-know it and this wonderfully delicate sketch of the British Countryside takes on a fragile and elegiac intensity.

Most of the information in this post has been gleaned from the lovely little tribute website created by art dealer, Michael Sims, thomashennell.com

… against a bloody background … 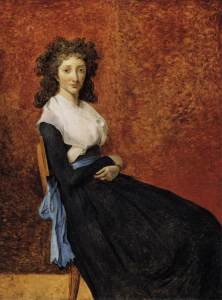 I always think of Jacques-Louis David as a history painter and so the delicacy of his portraits take me by surprise.

Painted in 1791-2, this striking young woman is most likely Marie-Louise Micault de Courbeton (1769-1802), the wife of Charles-Louis Trudaine, who was a friend of the artist. The Trudaine family belonged to the liberal “haute bourgeoisie” and they were  initially favourable to the Revolution. Marie-Louise is wearing simple clothes suitable for someone of her political leanings; and her blue sash, white shirt and the red background makeup the new Tricolour flag of France. The portrait was never finished as the Trudaines quarrelled with David over his support for the increasingly violent Terror.

David‘s characteristic “scumbling” of the red background – a technique he used for these portraits – adds a clamour of hysteria to this already nervous, defiant young woman, with her arms folded awkwardly across her body and her half turn towards the viewer. The Trudaine brothers went to the scaffold soon after this. Marie-Louise died ten years later when she was 33 years old. Alas, I can’t find anymore details about her but it can’t have been a very happy life.

David was an ardent supporter the Terror. He organized revolutionary fetes and ceremonials to replace the Catholic festivals and painted many key images of the period such as the pietà of the Revolution, The Death of Marat. David was a member of the Assembly, however, he too was eventually imprisoned. When the artist was released, a couple of years later, David stayed away from direct politics but did become a favourite painter of Napolean.

… lost portrait of a king …

One of the most alluring images in the Charles I, King & Collector exhibition is the informal portrait of Philip IV by Velasquez. Charles never owned the picture – so why did the curators include it? 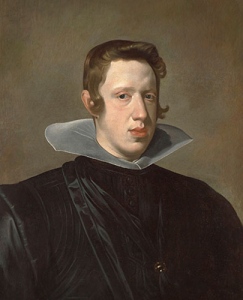 In 1623, when Prince Charles was 22, he was betrothed to the King of Spain’s sister. Negotiations over this alliance had begun to drag so Charles seized the initiative and travelled to Spain to win the Infanta over. The whole mission was a bit of an embarrassing disaster because diplomacy is never that simple but his informal embassy was the springboard for Charles’ passion for art collecting.

It was a court of young men. In 1623 King Philip IV was 18 and had already been king for two years. He entertains the older Charles for months in Madrid and even gives him a Titian to take home (Charles V with a Dog, 1533). In this same year, Velazquez who was only 24, is ordered to the city to try out as the new Court Painter. It is probable that he painted this quick and informal portrait of Philip to secure his position – and a close, successful relationship began between monarch and painter which lasted until Velazquez‘s death.

Intriguingly Velazquez also painted a portrait of Charles during this year. The closest image we have to what it may have looked like is this portrait from the studio of the Dutch painter, Daniel Mytens.  A fine work – but no Velazquez. 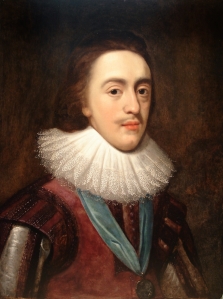 Daniel Mytens was the principle painter at the Stuart court from the early 1620s to the mid 1630s. This portrait is a contemporary replica, probably painted in Mytens’ studio, as it was one of his most important early commissions.  It shows Charles I before he became King in 1625.*

Charles I, King and Collector at The Royal Academy, London runs until 15 April 2018. With all exhibitions of this size and popularity, it is worth getting the catalogue first to scope out what you want to see before plunging in. It’s a wonderful book with over 200 colour illustrations, essays to put the exhibition in context, and detailed notes on provenance. Softback £28. Hardback £40.  A link to the Royal Academy bookshop is here.

Neither Virgin nor Venus. Five Outstanding Women from Charles I, King & Collector.

… neither Virgin nor Venus …

Among all the Royal portraits and big dramatic pieces in this outstanding exhibition, there are some extremely fine images of women. The Academy rooms are teeming with spectators and the show has 140 works of art on view, so it pays to have an idea of what you are looking for. Here are five I wouldn’t want anyone to miss …

My advice would be to ignore the crowded first couple of rooms and make straight for Gallery VIII which holds pictures from “The Queen’s House” and take a look at this Head of a Woman (c.1630-35) by Orazio Gentileschi. It’s such an arresting work combining beauty and determination in a very penetrating stare – as her former owner said: “She’s no extra!” The painting sold to a private buyer in January 2018 for $1.8 million and there’s a brief Sotheby’s video about her here. 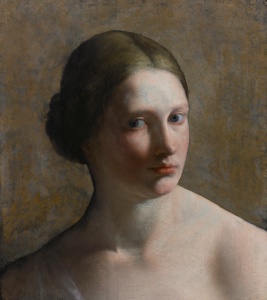 Then turn around and, diagonally opposite in the same room, is a painting by Orazio‘s daughter’s Artemisia Gentileschi called Allegory of Painting (c.1638-39). Artemisia joined her father and her brothers in London in 1638. Charles and Henrietta already owned at least three of Artemisia‘s paintings by then and she found steady employment here. Some suggest this is a self portrait though it is not listed as such in Court inventories and is perhaps instead a younger, more idealised version of her 46 year old self.  It is probably more a declaration of her remarkable status: as a practising and successful female artist at this time – an image of a working painter not a fanciful allegory. 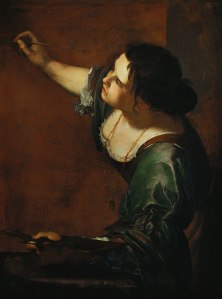 Travelling back a hundred years to the court of Henry VIII, the next picture is a portrait of Anne Cresacre ( c.1526-27) by Hans Holbein. This piece of fragile wonderfulness can be found in the next room along, Gallery IX, “The Whitehall Cabinet.” Charles’ Cabinet in Whitehall Palace was a private space decorated with more personal items from his collection; the core of which he inherited from his older brother, Henry, including these a set of drawings by Holbein. These sketches were made for a large group portrait of Thomas More‘s family – since lost. Anne was a ward of More’s and became his daughter-in-law around this time. The exquisite delicacy of this chalk drawing is truly arresting. It might just be me … but there’s a resemblance to the actor Louise Brealey who played Molly Hooper in Sherlock in the slight frown about her lips. 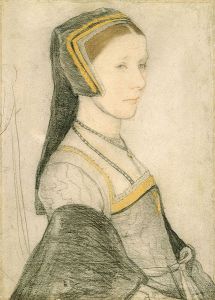 The next work executed about the same time but leagues apart in tone and handling. If there’s a Bronzino in a gallery I’m in front of it. The work is in “The Italian Renaissance” Gallery V and its understated elegance could be overlooked as there are Titians in the same room. There is some debate over whether Portrait of a Women in Green (c.1530-32) is actually a Bronzino or possibly a del Piombo or a Sarto. I have my doubts too – it’s not quite good enough but …. it could be a youthful work. Her direct gaze is typical of Bronzino’s portraits and she is an arresting example of a confident and self assured Renaissance woman. 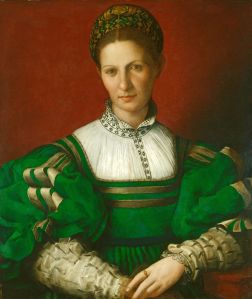 The final painting in my selection is the Rembrandt. Again in any other exhibition, a work of this quality would be centre stage but again she is in a corner of Gallery IV, “The Northern Renaissance” and could easily be over looked. This Portrait of an Old Woman (c. 1627-29) is also called The Artist’s Mother as Rembrandt often used his mother, Neeltgen Willensdr, as a model at the beginning of his career. The painting is not a portrait but a tronie (a generic term for ‘face’). Such tronies move beyond imitation and become imaginative exercises using carefully chosen costume and dramatic illumination – a cross between a portrait and a historical painting. I was fascinated by the interplay between the lines on her face with the gorgeous lace and fabric detail, both picked out with a warm Northern European light. It is an amazing painting. 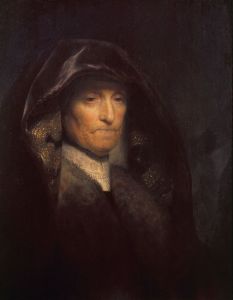 So there you are: my top five paintings of women from Charles I, King and Collector. Which paintings caught your eye?

Charles I, King and Collector at The Royal Academy, London runs until 15 April 2018.

With all exhibitions of this size and popularity, it is worth getting the catalogue first to scope out what you want to see before plunging in. It’s a wonderful book with over 200 colour illustrations, essays to put the exhibition in context, and detailed notes on provenance. Softback £28. Hardback £40.  A link to the Royal Academy bookshop is here.