… evil fashionista Lucretia Cutter is back …

I thoroughly enjoyed Beetle Boy, a sparkling and inventive story with lots of beetles. This sequel, Beetle Queen, moves the adventure and friendships on, as the three children, Darkus, Virginia and Bertolt, try to work out what Lucretia is up to whilst fending off unwanted parents and saving and /or capturing beetles, aided by Uncle Max . The pantomime villains, Pickering and Humphrey, break out of jail and they all end up in LA for the Film Awards.

I loved the way MG has developed the various friendships and the tensions between parents, children and, of course, beetles. I was particularly drawn to Novak, Lucretia’s lonely daughter, and her beetle, Hepburn. They play a vital role in the splendid climax at the LA theatre.

MG Leonard worked as a freelance Digital Media Producer for various theatres. She spent time in the music industry and managing bands, most notably The Divine Comedy. She trained as an actor, directing and producing as well as performing, before deciding to write her stories down. MG lives in Brighton with her husband and two sons.

She is my eleventh review in the British Books Challenge 2017.  Come and join us at over at Chelley Toy’s site.

Cover design moment: Beetle Boy‘s outstanding design from the Brighton based, Helen Crawford-White, inspired me to add my “Cover Design Moment” to each book review. Having so many books pass through my hands these days, it becomes increasingly apparent how important excellent design is.  This second cover carries on the bold colours and delightful whimsy of the first with quirky interior illustrations by Karl James Mountford and beetle illustrations by Elisabet Portbella. (It is shame that the acid yellow beetle fore edge couldn’t be on the paperback – but I’m guessing it costs a lot to produce.) Further examples of Helen’s work can be found at her Studio Helen website here.

Beetle Queen by MG Leonard was published by Chicken House Books on 6 April 2017. It was lent to me by Emily who runs Emily’s Bookshop in Chipping Campden. Thanks, Em!

Philip’s second book in this Railhead series continues to follow Zen Starling and Nova, the  almost human Motorvik.  His nuanced cast include Chandni Hansa, a “Popsicle Girl” because she was deep frozen in prison; the reluctant empress, Threnody; and the broken hearted Kobi Chen-Tulsi.  His individual style of storytelling builds sympathy and curiosity as they perform unexpected heroic acts amidst their bewilderment and wonder travelling across the New Worlds.  They  encounter terrifying aliens such as the deliciously feline Kraitt whilst all the time riding trains and running through Gates towards the mysterious Black Light Zone.

There’s a continuation of the gentle love story between Zen and Nova and the constant allure of the  Rail Network singing out across the galaxies but, perhaps what will stay with me the most, is the dazzlingly  inventiveness of his world.   He conjures visions of the mysterious Guardians constructed out of virtual code;  Uncle Bugs with his smiley face; and, as always, the sentient, singing trains of the Network Empire.

Cover design moment: A sequel to the first Rail Head design – again with the fore edge decoration – put together by designer Jo Cameron and her colleagues at OUP, using work by the brilliant Ian McQue.  You can see more of his work here.

Black Light Express was published on 6 October 2016 by Oxford University Press.  I bought my copy from Emily’s Bookshop. YAY.

I love it when I can relax into a story, enjoying the easy ride of a born story teller.  Cogheart is just that type of book.   With a host of clockwork mechanicals, including Mrs Rust and Mr Wingnut and a stubborn fox mechanimal, Lily and Robert race through a thrilling plot, fighting  deliciously sinister mirror eyed villains towards a tremendous finale full of airship chases and clockwork skullduggery. 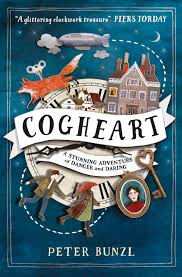 Peter Bunzel spins a well constructed story with immaculate pacing and lovely plot twists which create various anticipations to savour for a sharp eyed reader.  Nothing  is wasted or extraneous, though Peter takes time to add decorative Steampunky flourishes.   It’s a great fun and I highly recommend it – probably in the 9 to 12 age range.

Cogheart is Peter Bunzl’s debut novel. He is a successful animator working on commercials, promos and 2 BAFTA winning kids’ TV shows. He has also written and directed several short films.  This is why there’s a delightful mini website for this book: cogheart.com and some FREE gifs on offer.

Cover design moment: With Peter’s visual background, it’s not surprising that Cogheart has a great cover, map and occasional illustrations by a wonderful American artist,  Becca Stadtlander.  Her work really enhances the story.

Cogheart was published on 1st September 2016 by Usborne and recommended to me by Emily at A Festival of Books.  Thanks, Em!

… a great adventure from a wonderful storyteller …

As fierce as her wildcat companion, Moll fights the terrifying dark magic which is calling

to her through dreams.

This is a great adventure story which rattles along at a tremendous pace.  Abi is a wonderful storyteller who can conjure up Moll’s forest world with an array of characters, painted with a few memorable brushstrokes: Siddy with his worm, Porridge the Second; Hard Times Bob and the sturdy Oak.

I particularly liked the gypsy atmosphere and manner of speaking which adds a unique charm to the book.  The sequel, The Shadow Keeper, is out now.

I thoroughly enjoyed this sparkling and inventive adventure story surrounding a sealed room mystery.  How could  Bartholomew Cuttle disappear from the locked Coleoptera collection room in the Natural History

Museum?  His son, Darkus, along with friends, Virginia and Bertolt, set out to solve the conundrum.  Confronting a couple of grotesque pantomime villains, Pickering and Humphrey, and foiling the Cruella de Ville-esque, Lucretia Cutter, along the way.

The real stars, of course, are the beetles: Baxter, the rhinoceros beetle who is featured on the front cover; Newton, the firefly; Marvin, the frog-legged leaf beetle, and the unforgettable insect fashionista, Hepburn.

I was beguiled by the blossoming camaraderie between the beetles and children as the story enfolds to a satisfying conclusion … with a sequel, Beetle Queen, on its way.

I really must mention the fore-edge decoration on the paperback which is a delight.  Well done to Chicken House Books and Studio Helen for such a charming touch.