After contacting Pan Macmillan, I’ve tracked down the designer of the wonderful Jackself cover.

She explained the thoughts behind the design: “… the book has a cast of characters – plus lots of references to Jack figures – so Jackdaw, Jack-O-Lantern, Jack Sprat, Cheapjack. Our idea was to make the cover a kind of cut-out or pattern book – so that it would be designed to look as if you could cut out these figures and use them for your own little puppet theatre. The author was really keen on the jockey image as it has the vibrancy and colour we wanted to achieve.”

The “Jockey”  was one in a series of paper puppets printed by Franz-Josef Holler, a German toy manufacturer in the 1970s and 1980s.  I am assuming the images are from late c19th.  As you can see, the cover design is pretty close to the original – apart the the face and cigarette. 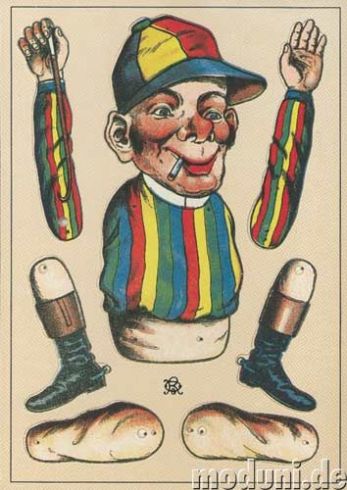 It’s such an arresting image.  The dismembered puppet body puts me in mind of a macabre butcher’s slab and as such, it’s very appropriate for this collection of poems.  My earlier review for Jackself is here.

If you would like to see any more of Naomi’s work, here is the link : http://cargocollective.com/NaomiClark

One thought on “Jackself : Cover Design”