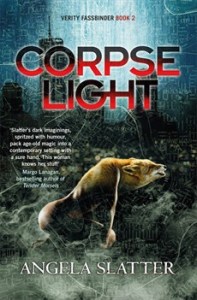 Verity Fassbinder is half Weyrd and half norm – a status which makes her well placed to police the blurred lines between the normal and the shadowy in the city of Brisbane. When an insurance company gets troubled by an “Unusual Happenstance, Verity is called in and the threads of the situation unfurl to coil around her friends and her family, and ultimately Verity herself.

Angela writes with great style and economy. The story line is fast and furious with lots of fabulous characters and relationship twists but, most of all, I’ve waited all year to spend time with Verity again. She is loud mouthed, full of heart and this time, she’s very, very pregnant.

Angela Slatter is an award-winning author of short story collections for which she has won the World Fantasy Award, the British Fantasy Award and five Aurealis Awards. Vigil, the first Verity Fassbinder book, was her first solo novel. Angela lives in Brisbane, Australia.

Cover design moment: The illustration of a Kitsune (fox) assassin is by Rory Kee, who is name credited on the back and appears to work for Quercus quite a bit – though unfortunately I can’t find a website for her.

Corpse Light by Angela Slatter was published by Jo Fletcher Books, an imprint of Quercus, on 13th July 2017. This is the second in Angela’s Verity Fassbinder series. Restoration, the third, is hopefully out next year.