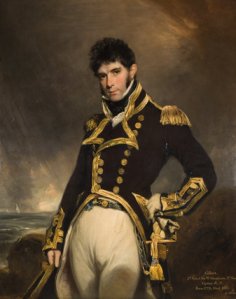 Why the Birmingham Art Gallery and Museum doesn’t make more of this lush portrait, goodness only knows.

This is one of William Owen‘s finest portraits. He painted Captain Gilbert sometime between 1801-05 whilst he was in his mid-twenties and a dashing Naval officer in the Napoleonic Wars. The face is finely worked whilst the rest of the picture is a virtuoso demonstration of impressionistic paint handling. The loose brushwork of his gold braiding, epaulettes and buttons add a very glamorous swagger to the Captain. 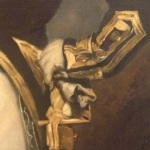 Born in Shropshire, William Owen was apprenticed to a coach painter and then sent to the Royal Academy School in 1791 when he was 22. Owen was a success and in 1810 he was appointed portrait painter to the Prince of Wales, later George IV;  however the prince never gave Owen a sitting and in 1813, when Owen was offered a knighthood, he declined. Whether out of exasperation or disappointment, I cannot find out.

In 1825 Owen died of accidental poisoning by an overdose of ‘Barclay’s Drops’, a heady mixture of aniseed, camphor and opium, after a chemist had mislabelled his bottles.