… fascinating peek behind the tapestries … 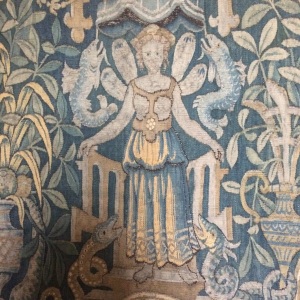 Barbara Clutton-Brock, the last owner, often said that “poverty is a great preservative” and a previous owner when showing visitors around in the 1940s was fond of explaining the shabby appearance by saying how the family had lost all their money in the war – not the recent World War but the Civil Wars of the c17th.

When the National Trust bought the Jacobean manor in 1991 much of the original fabric was still in situ. There had been no Neo-Classicism additions or Victorian renovations.  This unique house needed a new approach and so Martin Drury  (later Director General) declared instead of restoring Chastleton to its former glory the Trust would “… lay as light a hand as possible on Chastleton, to arrest 150 years of progressive decay with an almost imperceptible tightening of the reins.”

This light touch is incredibly demanding for the conservation team. They cannot restore or re-gild to perfection, merely retouch or conserve to normal flakiness. They can repair breakages post-1991, but anything broken before the sale is left as it was. The whole fabric needs to have the feeling of a romantic decline. This demands an extraordinary level of record keeping and an unwavering sense of Chastleton’s Spirit of Place. 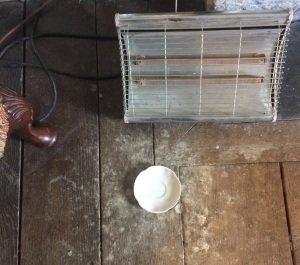 Barbara Clutton-Brock was obviously a great character. She re-wired the house herself and kept a tribe of cats in the house. This explains why none of the carpets are original. Her bedroom is laid out as if she lived there and includes a two bar heater and the stains around the saucer of milk.

The tour, conducted by Senior House Steward, Ruth Peters, (and assisted by various conservators along the way) was fascinating. Their enthusiasm for the house and its history shone through and they were happy to answer all our questions. Their detailed explanations took in technical conservation tools such as Blue Wool Dosimeters for measuring light and Book Shoes to raise heavy text blocks in volumes stored vertically; and also the use of Velcro for tapestries, Tyvek for linings and the Bit Box for pieces which have fallen off. I learnt how to tell the age of glass from the shape of air bubbles and why you shouldn’t talk whilst holding a humidity meter; how to vacuum antique fabric and why you should ask to see the photographs of the backs of the tapestries in the Fettiplace Room. By the end of the tour, I wasn’t surprised to learn that the House Stewarding Team who clean the entire house, with scaffolding and soft brushes in the Winter Closed Season, are actually far busier from November to March than when Chastleton is open to the public.

They plan to run seven of these tours this season and are well worth it at £21 a ticket. The website gives a timing of 1000-1130 am. Our party ran over by an hour … not that anyone minded, we were all completely enthralled. For further details on how to book, click here.

Chastleton House, Chastleton, Nr Moreton-in-Marsh, GL56 0SU, is open Wednesdays to Sundays, 1300-1700 between March and November. There is no cafe but tea and cakes are usually sold in aid of charities in the Church next door. For further details, click here.