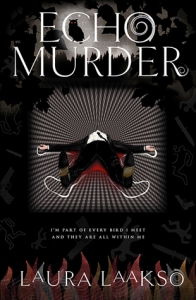 Yannia, the detective, is one of the Wild Folk who should be with her conclave but … it’s complicated. Her father is dying and she is not ready to take her place in the pack – nor at the side of her betrothed, Dearon.

Instead she is in Olde London trying to solve a murder that hasn’t quite happened yet.

Her apprentice, Karrion, is a Bird Shaman who, unfortunately, is very attractive to pigeons. Together ,they need to solve this repeating crime – its echoes are beginning to hurt the victim – before he actually dies.

Echo Murder is great fun to read: an intriguing hook with complicated characters living in the fully realised worlds of Olde London and the Northern Wild Folk conclave.

Laura Laakso is a Finn who has spent most of her adulthood in England. When she is not writing or working in her day job as an accountant, she is training and competing with her two dogs. As she says on her website : “With two degrees in archaeology, she possesses useful skills for disposing of or digging up bodies, and if her internet search history is anything to go by, she is on several international watch lists.”

Cover design moment : The cover design is by Jennie Rawlings. I love the typeface which complements the book’s themes. You can see more of her work here.

Echo Murder was published on 6 June 2019 by Louise Walters Books. It’s the second in the paranormal crime series, Wilde Investigations. My review of Fallible Justice, the first in the series is here.

I was sent a review copy by Louise Walters in return for an honest review. Thanks, Louise!