… intriguing and inspiring wander through this most multicultural of islands … 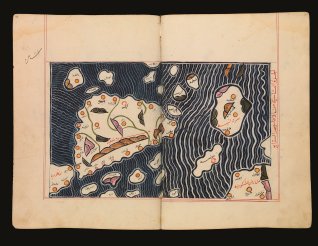 A gem of an exhibition – just about the right size – tracing the varied history of the Mediterranean’s largest island from its Phoenician and Greek settlers through successive waves of Romans, Muslim Arabs and Africans, Normans, Spanish and eventually the Italians.

As other commentators have said all this open minded cultural mingling is a refreshing change from “the Mafia and Montalbano” cliche that the island now carries.  I was beguiled by the alluring exoticism of the mix of exhibits: a projection of a decorative ceiling, ancient rock art,  a stunning mosaic Madonna. Each one a jewel like the Sicilian oranges described by C12th poet Abd ar-Rahman, who served the court of Roger II, as “blazing fire among the emerald boughs”.