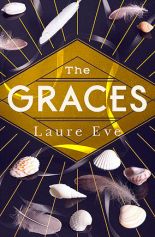 This is a brilliantly constructed thriller of claustrophobic teenage relationships interwoven with dark magic.  It is written from the point of view of River who comes to live in a Cornish town and slowly, inextricably, gets drawn into the allure of the beautiful, self-assured Grace family.

I particularly liked the extremely well drawn character development of River.  She is not an entirely sympathetic figure – there are hints about her past – but River grows into a courageous teenager with a dogged self belief: “we can fix this, right?”

Laure has an intense, fluid narrative style which gets the reader very close to River’s hopes and anxieties whilst keeping the plot racing along through a thicket of lies and deceit to an intense climax  – definitely one of my favourite reads of 2016.

I only have one quibble: there was an elemental strand which didn’t mesh very tightly with the rest of the story and was an unnecessary distraction.  I also feel the book has a weak cover design – the US cover is slightly better.  (But cover designs in general may be a topic for a completely different post … !)

The Graces will be published in September 2016.  The writer has a background in YA publishing; her first novel, Fearsome Dreamer, was longlisted for the Branford Boase Children’s Prize and Waterstone’s Children’s Prize.   On the strength of The Graces, I’m now off to buy it.

NB: I would say this is firmly older YA with descriptions of rebellious British teenagers, ie a bit of swearing and quite a lot of underage drunkenness.