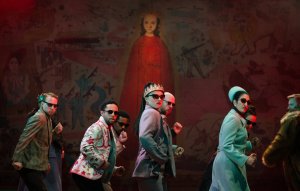 Eleanor Rhode‘s vibrant interpretation re-energises what could be seen as a bitty, minor tragedy into a fast moving procession of dazzling sets, seasoned with great fights, witty costumes, and sizzling choreography. The set design and costumes by Max Johns are a triumph of big statements and bold colour. The delivery of this heightened imagery and vibrant movement serves to showcase some mesmerising Shakespearean language: Constance’s grief, Hubert’s remorse, and Austria’s bombast.

Set in a fast and contemporary world of shifting alliances and family ties, the action runs between France and England with a boxing match, a wedding fight and a torture set – surely inspired by the dentist scene in Marathon Man.

The splendid cast are obviously having such fun in their Sixties gangland and so it is really difficult to pick out individual actors for particular commendation. Instead I give you a very sassy Katherine Pearce playing Cardinal Pandulph for another taste of the production … 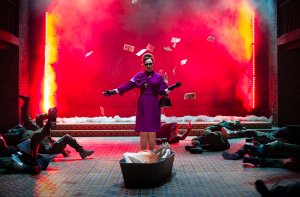 … and a smart understudy, Sarah Agha, stepped up to play the princess Blanche for the performance I saw.

This play is the RSC debut for the director, Eleanor Rhode, the designer Max Johns, and the majority of the Creatives and it’s a real triumph of new ideas and a fresh approach.

Highly recommended. Do yourself a favour: go and see it.

King John is at The Swan Theatre RSC, Stratford Upon Avon until 21 March 2020 (Running time: 3 hrs + 20 mins interval). Further details can be found on their website here.